Home
Bhutan
Tiger’s Nest Trek: All You Need To Know

1) I took a one-way taxi to this place (The trek base is situated at a distance of 12 kilometers from Paro main town) as I wasn’t sure how long would it take. (However, my taxi-driver wanted me to give him the exact time.) Also, I am a bit overconfident of my hitch-hiking skills almost all the time.
2)  It is a hot day (Oct the 2nd, 2015), and despite repeated warnings (that the trek ought to be started no later than 8:30am) from my hotel-manager, here I am, looking hopefully at the thick globules of clouds. And that tiny speck, up in the mountains, namely Tiger’s Nest.

Please watch this in HD. 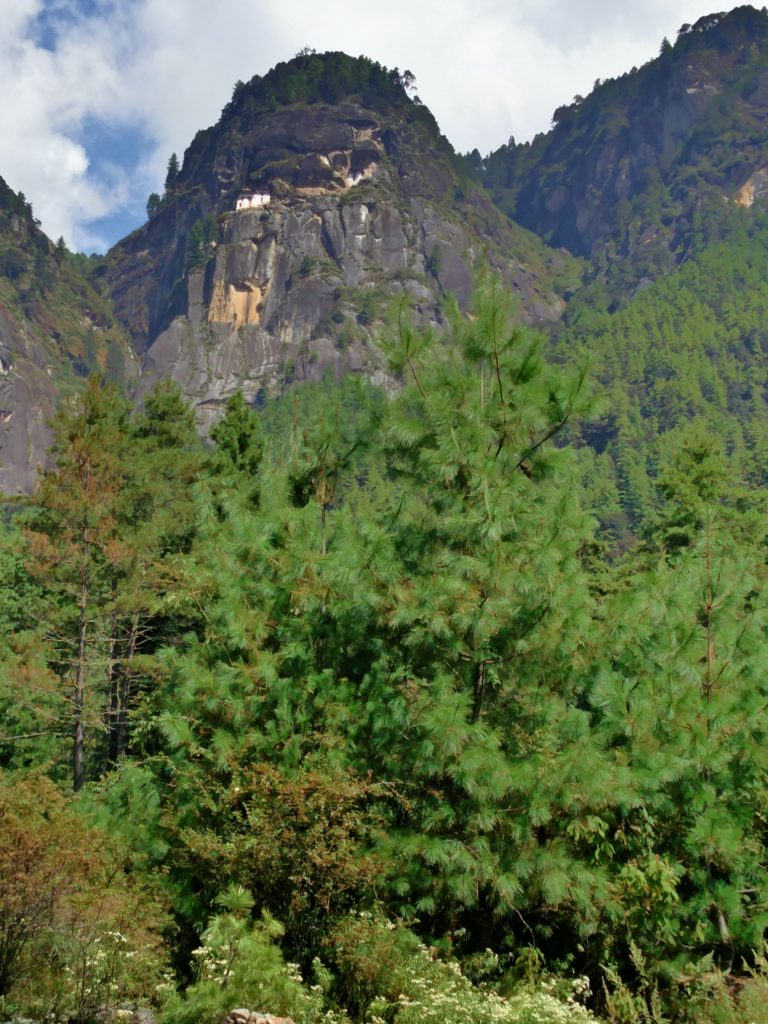 From the point where the taxi drops you, there is a small line-up of trinket and handcraft traders. The patch of land is a part of pine-forest. This is where one buys the local trekking stick for Nu.50 (if you are taking sticks, which I suggest you do, please be in the know that taking two sticks works out better than one).
Also, hire a horse if you don’t prefer walking the distance. A giant rock serves as the platform on which one stands, to be able to climb on to the horse-back, assisted by the handler. Much amused at the ‘jugaad’ set-up, I walked past it. Beyond the mini-market , there was a clear patch, where I took some pictures of the view of the monastery.

I undertook the entire trek on foot.

Just 50 meters from here, starts a gradual ascent. Five minutes into the trek, and I met an elderly couple who remarked, “why are you starting so late!! The monastery closes at 01:00pm. Run!!”.  [Well, they were correct, albeit partially.]

I ran through the gradual ascent, the steep ascent, the mid-point café, right till the official viewing point of the Tiger’s Nest Monastery. This is where people jostle with each other to take pictures, and every camera captures THE SAME thing. 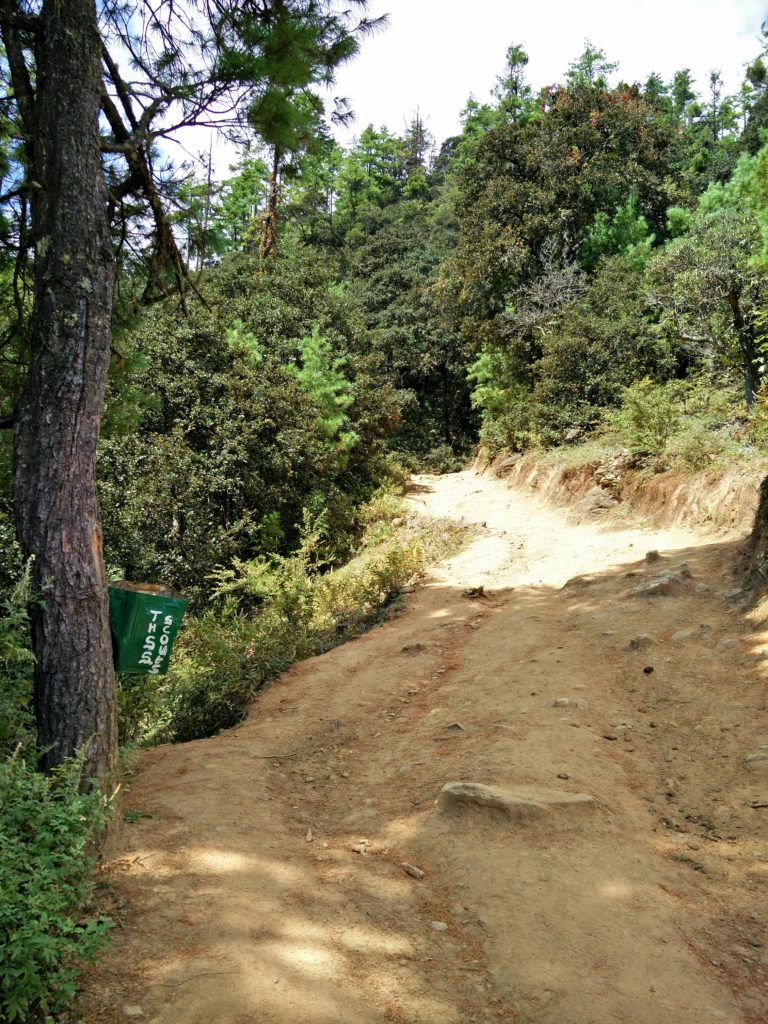 Just five minutes before the viewing-point, as I huffed and puffed my way past a constant stream of people who were headed back, I met another elderly couple. They said, “Why are you running??!! The monastery will close in 10 minutes, but will reopen at 2:00pm.”

With another hour to kill (actually, photographers never need to kill anything; they shoot :p ), I focused on soaking the feeling of being at the edge of cliff.
Of sweat being taken care of by the slightly cool wind.
And of seeing Taktsang Monastery so up close. 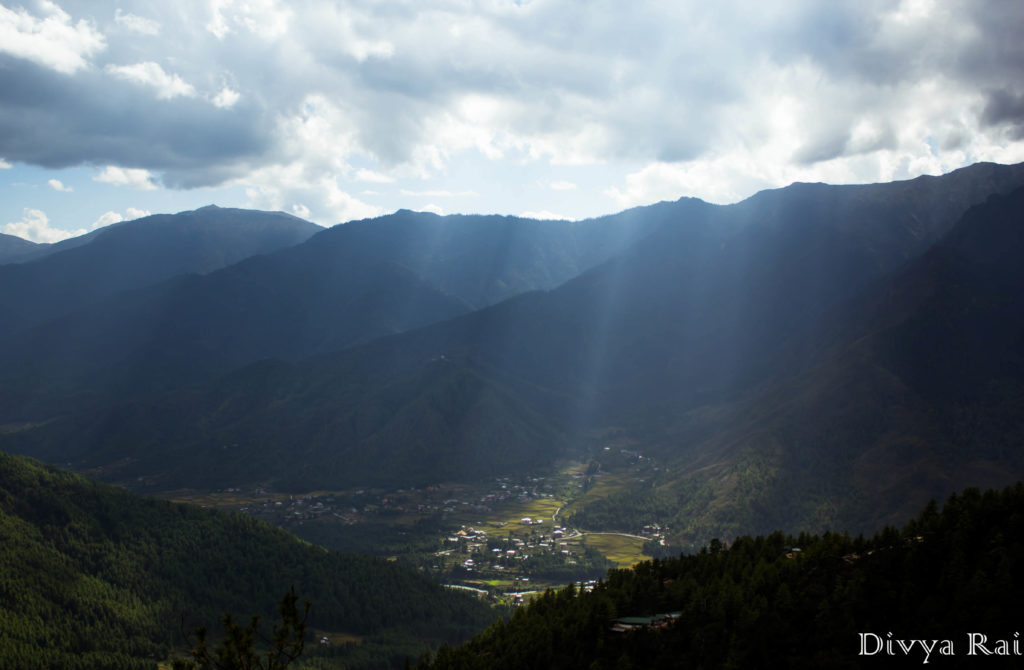 Of earning it all, in every sense of the word.

When I reached at the edge of the cliff from where one gets the clear view of the monastery, the first thing that hit me was a faint feeling of vertigo. The same thing happened when I reached the area where the monastery is located. It surprised me that none of the travelogues, reviews, blogs I had read ever talked about this bit. The dizziness is unmistakable; though difficult to say if it is because of the height or the altitude-sickness. Latter, because Tiger’s Nest is perched at a height of 10,000 feet from the sea level.
Even with that, it makes one’s Bhutan tour worth it!

Please watch this in HD.

No matter how many times you have seen the images of  Tiger’s Nest monastery floating around on various media, when you see it in reality, it is bound to overwhelm you with emotions. It is set at such a precarious location, that you cannot help but wonder what architectural roadblocks must have the people faced while constructing it in the 17th century. And while reconstructing it in 1998, after the original one got destroyed in fire. The former used human labour, while the latter used cable car to carry the construction material up to the cliff.
The usage of the cable car was discontinued once the re-building work was over. The idea is to earn this auspicious sighting with effort. 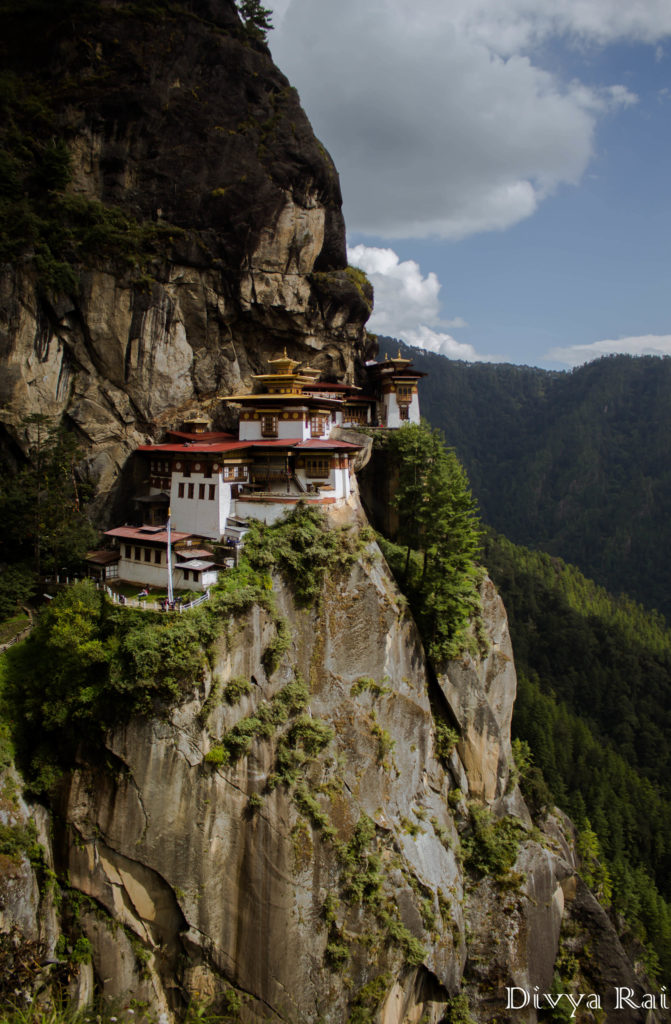 Just twenty minutes before it was time for the monastery to reopen, I started the last leg of my journey, which is the staircase. There are around 800+ steps. On the way, there is a waterfall that goes underneath a bridge, after which there is the last bend with steep stairs. This is the point where my knees felt locked-of-sorts, but since I could see how close I was, I carried on with the steep staircase. 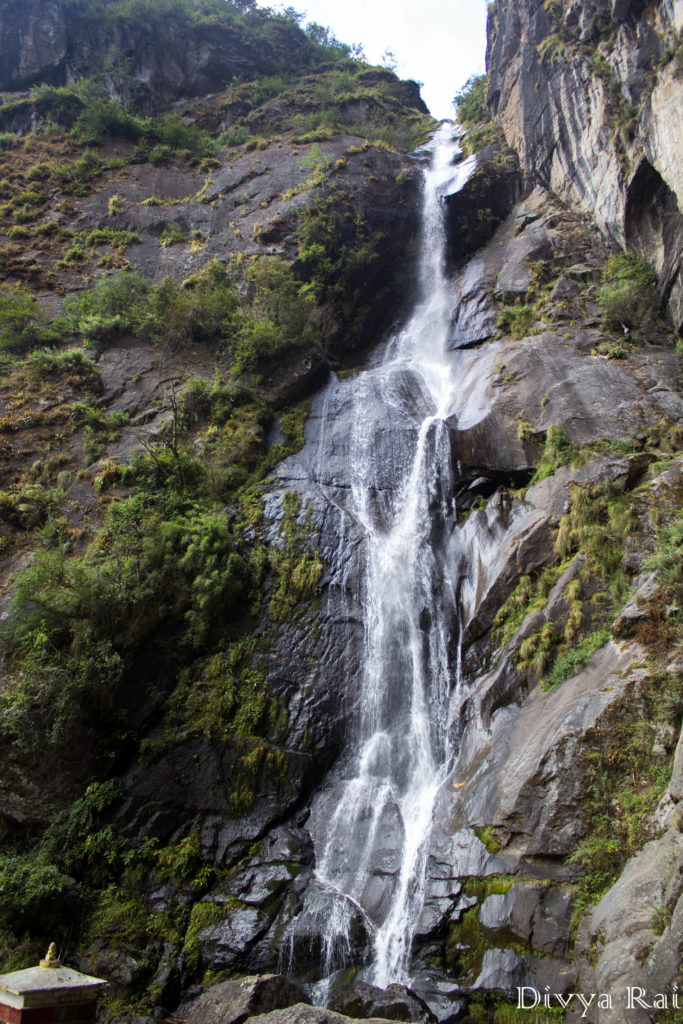 Once I was at the monastery doorstep, I was asked to leave everything inside a locker and keep the keys with me. No camera, phone, or any other gadget is allowed. After I had submitted everything I had, I was asked to fill my details in a register, which I duly did.
The fumes from incense and the chants from inside the monastery calm you down as soon as you take the initial few steps.

Must Read: Why Is Paro Airport One Of The Toughest To Land On?

Inside, there is a cave-like structure next to the butter-lamp room where guru Padmasambhava had meditated. I saw many people turning away from here because the cave is too narrow, and calls for a bit of adventure in the soul to venture. Only one person can go in at a time. I peeped in with skepticism, but even before I could assess the whole thing, a group of students lined up behind me said, “go, go; your turn.” There I was, climbing the planks next moment. It felt like some kind of game.

The monastery has several rooms with various kinds of prayers, chanting and meditation sessions going on at most of the times.

While exiting the monastery, I saw some students, a monk and tons of laughter. Upon going close, I realized that the challenge was to stand at some distance from a statue and walk up to it to touch the eye, albeit with yours closed. I tried and was way off, and mouthed “fu*k!” to express my disappointment. The monk smiled in return and I squirmed in embarrassment.
With this, I exited to collect my belonging from the locker-room.

The good part of starting the trek late was, I found most of the temples and shrines with very thin crowd. There was no ‘hurrying’ in the experience, or the process.
Once I collected my things from the locker, I met two senior citizens (two friends, who had known each other for forty years) from Kolkata, and their guide called Durga. Latter was a telecom engineer with Bhutan telecom. We got talking because they were curious to see a solo female traveller trudging around. I told them I live in Delhi, and Durga informed me that Delhi is where he was trained for his profession.
Three of them suggested that I walk with them, and if I find no transport for way back, I hitchhike with them too. I was so grateful!

Of Guides In Bhutan

On our way down, I was wondering why would a telecom engineer bother doubling up as a guide (I don’t know if anyone in India would); the pride in his voice was unbelievable! Durga sensed my dilemma, and explained that Bhutanese people are very proud of their country and culture. It gives them immense happiness in showing their guests around; it is like a proud owner of a b-e-a-u-t-i-f-u-l house!
What a wonderful thought! Since he said that he is available to show people around on weekends, I have mentioned his contact number (with his permission) at the end of the post.
You need to tell him well in advance for him to be available to take you around.

Durga told me that Bhutanese people have a lot of respect for India and Indian people. Apparently, the Indian government manages Bhutan’s telecom, road-network, hospitals, army, and the people of Bhutan are more than thankful for it!

We trekked down with students who carried trash from the monastery to the trash-bins on the way. The sun filtered over Paro beautifully.  It drizzled a bit, making the mud track slushy and slowing our pace. By the time we reached the parking-lot, it was almost dark. What was a chirpy place in the morning, now wore a deserted look and had only one car which was Durga’s.
Durga, and his two guests dropped me at my hotel, and refused any money in exchange of the favor. Bhutan is a nation that reminds people of a virtue called kindness, many times over.
If trekking in Bhutan is something that is of interest to you, please be in the know that Tiger’s Nest hike is not to be missed.

As the history narrates, guru Padmasambhava flew on tigress’ back (an incarnate of Yeshe Tsogyal) to a cave perched on this cliff, where now the Tiger’s Nest sits.

The guru has been known to have founded the Mahayana School of Buddhism, and later on purified it to preserve integrity of Buddhist culture. He meditated for three years, three months and three days in this cave, a place which later gained religious importance, and that is how Tiger’s Nest or Taktsang Monastery came into being.

About the Taktsang Monastery trek: 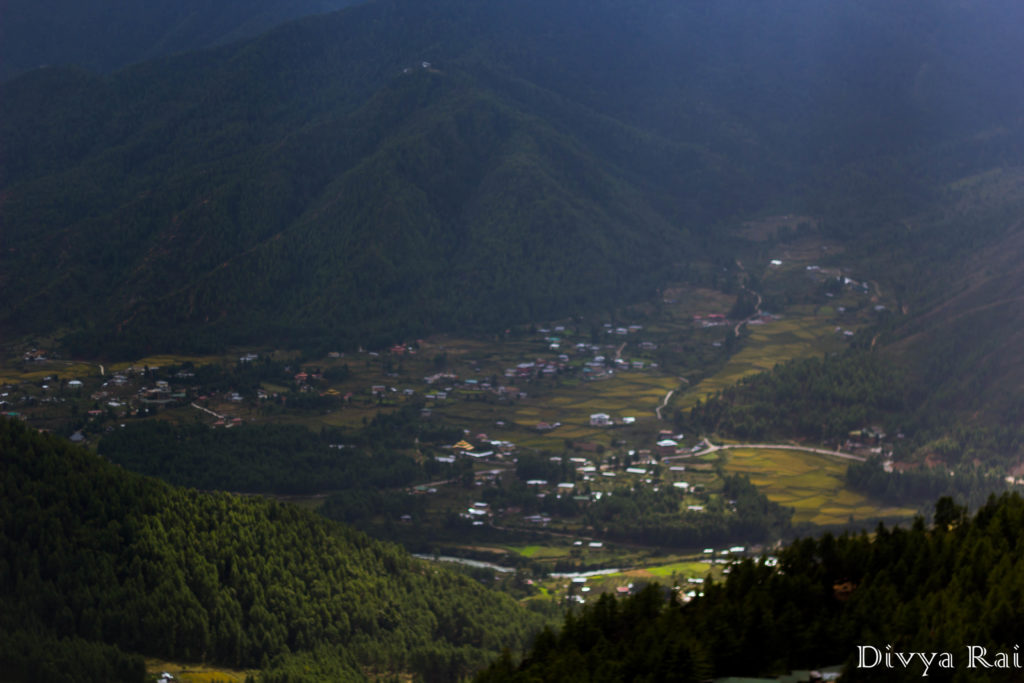 View from the Tiger’s Nest 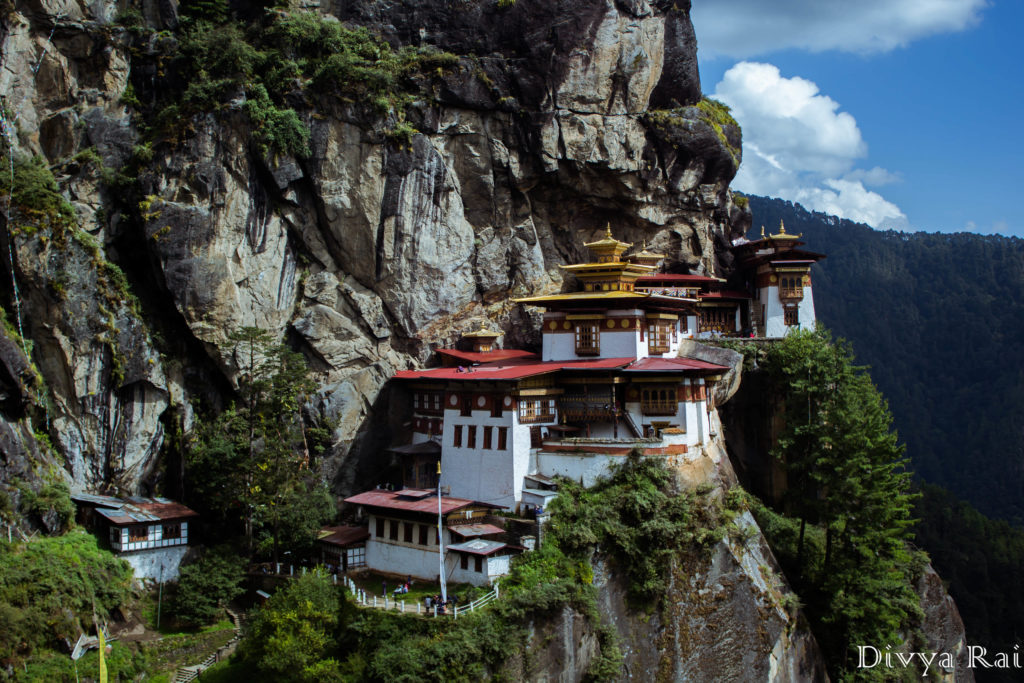 Have a safe trip!

Durga, the guide: 17113440
(In case he asks you how you have the number, tell him the girl who walked down with you when you took two friends from Kolkata to see Tiger’s Nest Monastery, has given it to you.)

Edit 1:
Apparently, the authorities have read this post, and have cleaned up the toilets at the monastery. Some of you are truly brilliant and entrepreneurial:

Tiger's Nest Trek
Yay!
One of the moderately easy treks.
The trek view is scenic.
One of the most gamified monastery experiences.
Horses/ponies are available for people might find it difficult to walk all the way.
Nay!
The altitude; it can trigger Acute Mountain Sickness.
Mud-track; not recommended for rainy days.
Strenuous, if one is physically highly unfit.
Experience
Facebook Twitter Google+ pinterest
Bhutan Himalayas
51 Points