Read Day 2 here. (The plan was to start from Tabo and visti Pin valley and stay at Demul village.)

We all got up by 6:45am and I wished I could be served with the tea in my bed itself. I negotiated with two other travel mates to see if they could get one cup for me as well when they go downstairs to get it for themselves. Turned out, everyone unanimously had decided to have the tea in the common area itself.
It meant getting out of the bed. It meant (horror of horrors) climbing down a flight of 20 odd steps. Climbing (up or down) anywhere was just not there in my agenda that day. I had done it enough with Dhankar lake trek the day before. That morning, it took every bit of my will-power to get out of the bed and join everyone in the common area. Quite magically, two cups (of masala chai) later, I felt a lot better, though the fever persisted.

Post the tea, we rushed back to our rooms to get ready .Thankfully this guesthouse had solar geysers and we could get ready without last minute surprises.
Roommate got ready first, while I packed my luggage. The order of stacking the contents within the backpack had changed completely by now. I had packed pain-relief cream, woolen socks and torch in remote corners of the backpack. These things had sneakily found their way up for easy and frequent accessibility. The fact that the pain relief cream got promoted to my pocket sooner than I knew, should have warned me sufficiently about the days to come. Everyday, a new part of our body would get added to the list of  “currently defunct parts”.

All of us checked out of our respective rooms and just about managed to assemble for breakfast by 8:15am.

Breakfast was fun, relaxed and filled with hilarious moments.

Post-breakfast, (almost at 9:00am) we loaded our luggage back onto our Tempo-Traveller and headed for Tabo Monastery, which was practically next door.  Anjaan, our guide took us around the place, furnished us with details and history about the place. Personally, I am not a history-buff and hence I would find the walk around the monasteries a bit boring, but Tabo Monastery is a piece of gem. It was founded in 996 AD, and is the world’s oldest surviving monastery.
Most of the old monasteries do not allow you to click pictures once you are inside (probably because of the security reasons as many of them had religious scriptures stored inside). That made the entire activity a bit too mundane for me.

Post the walk we took a photo-break and went around clicking pictures. Tabo Old monastery also stocks photo-postcards that one can buy as souvenirs/keepsakes . We bought many but our thrill lied in posting them from Hikkim, the highest post-office in India, or probably the world. (We could not manage this, as our timings did not match with the post-office’s). Tabo monastery was probably the only monastery to have a proper souvenir shop outside the compound.

We left Tabo at about 11:00 am and it took us 1 hour 45 minutes drive to reach Pin valley. It is situated at a height of 12000 ft. above sea level. The way to the valley was still under construction when we were on the way. We reached Pin valley monastery’s compound and hung around to chit-chat with the Lamas and learn about their life in the monastery. 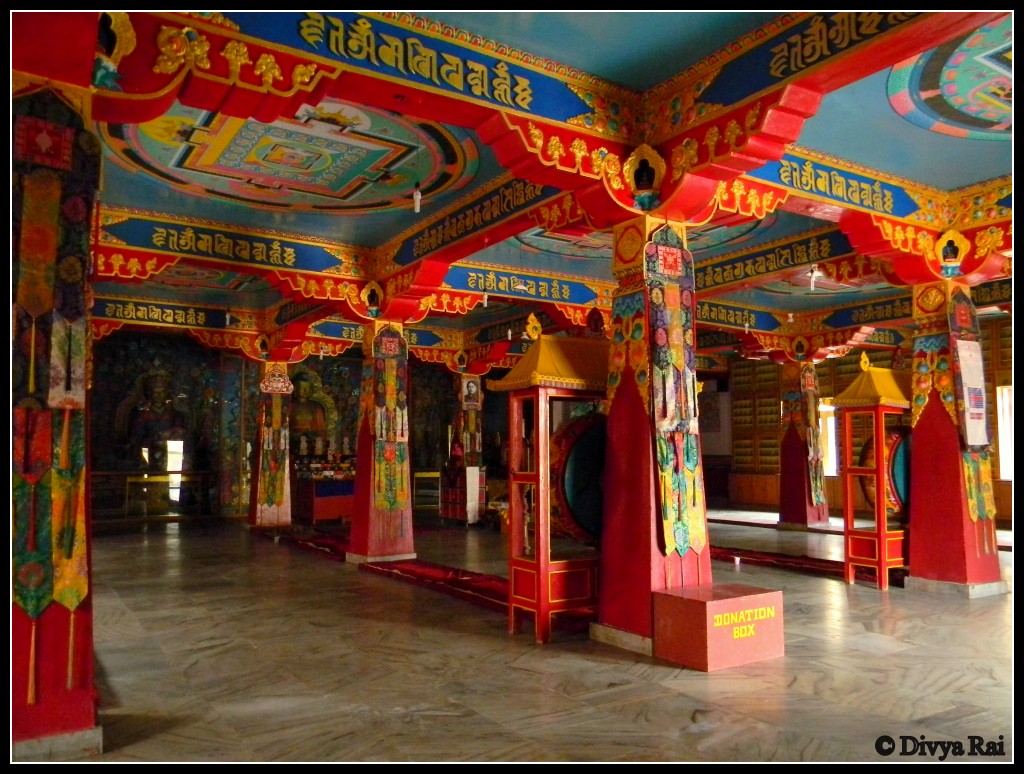 Pin valley monastery is one of the modern ones. It has an old monastery too, but it is much smaller. We took a photo-walk around the monastery and then had our tiffin lunch in the monastery compound itself.

We left Pin valley at about 3:00pm and proceeded towards Demul, which is located at a height of 14300 ft above sea level.

Close to the monastery, in the mountains, are the establishments made in total seclusion and that is where the monks meditate for long duration at a stretch.

Home-stay in a village like Demul was a new experience for each one of us without exception. When we reached the village, our respective home-stay host/hostess was there to receive us. One look at the village and I mentally binned my resolution of refraining from any climbing/trekking for the day. Me and my room-mate accompanied our hostess to the house which was on the higher side of the village and the walk-way seemed pretty steep visually. Once we started climbing it (coupled with our backpacks, which weighed 30-40 kgs on an average), I totally understood the reason for not being able to spot a single person who was obese. 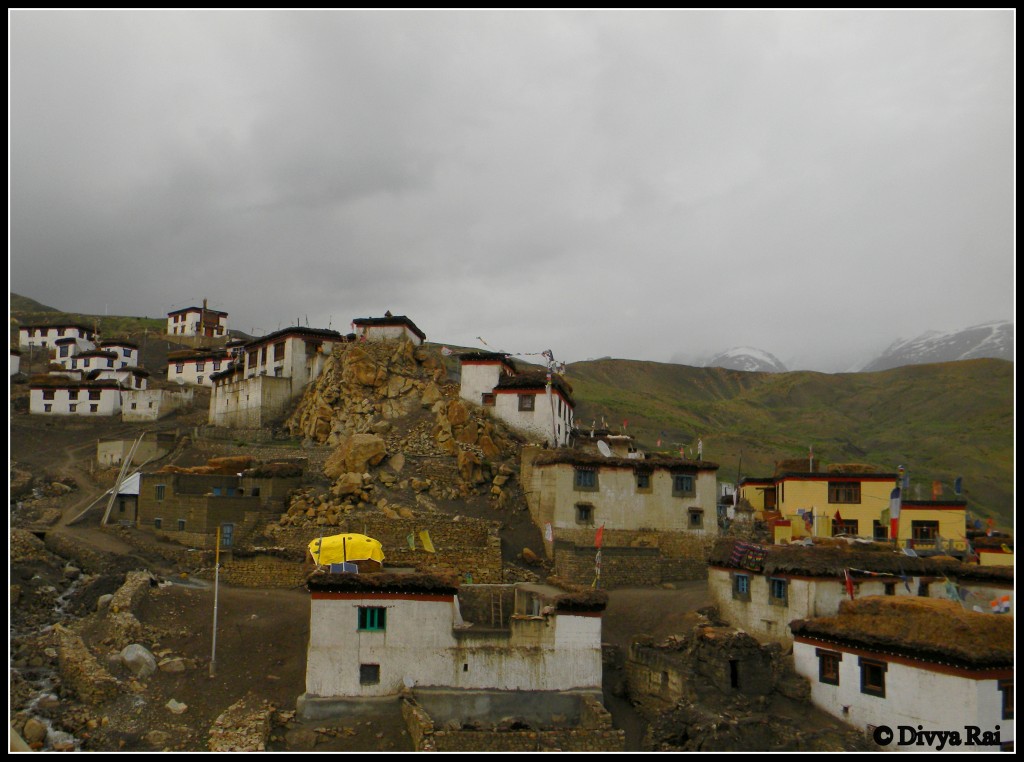 Our hostess escorted us in to our house and we were led to our room. It was a basic room, with all the necessities and a window with an amazing view of the Himalayas. I fell in love with the view almost instantly.

She got us the much needed evening tea. We requested her to join us so that we could get to know a bit better about each other.

It was beginning to get cloudy and it looked like it would rain any minute now. Roommate and I decided to take a quick walk around the village and see which of our travel-companions were housed where. The minute we stepped out of our house it began to drizzle. We could barely manage to spot 4 of our companions in two of the neighboring houses that we decided to return to our place to avoid getting drenched in the rain.

Once back, we decided to help our hostess with the kitchen work. We did some chopping/cutting/peeling amidst laughter, conversations and photography. And soon the rain stopped. We opened our windows to beautiful double-rainbows and saw our other companions gearing up to go for a photo walk in the village. It was almost dusk and roommate and I decided to accompany the four of our travel companions to the photo walk. 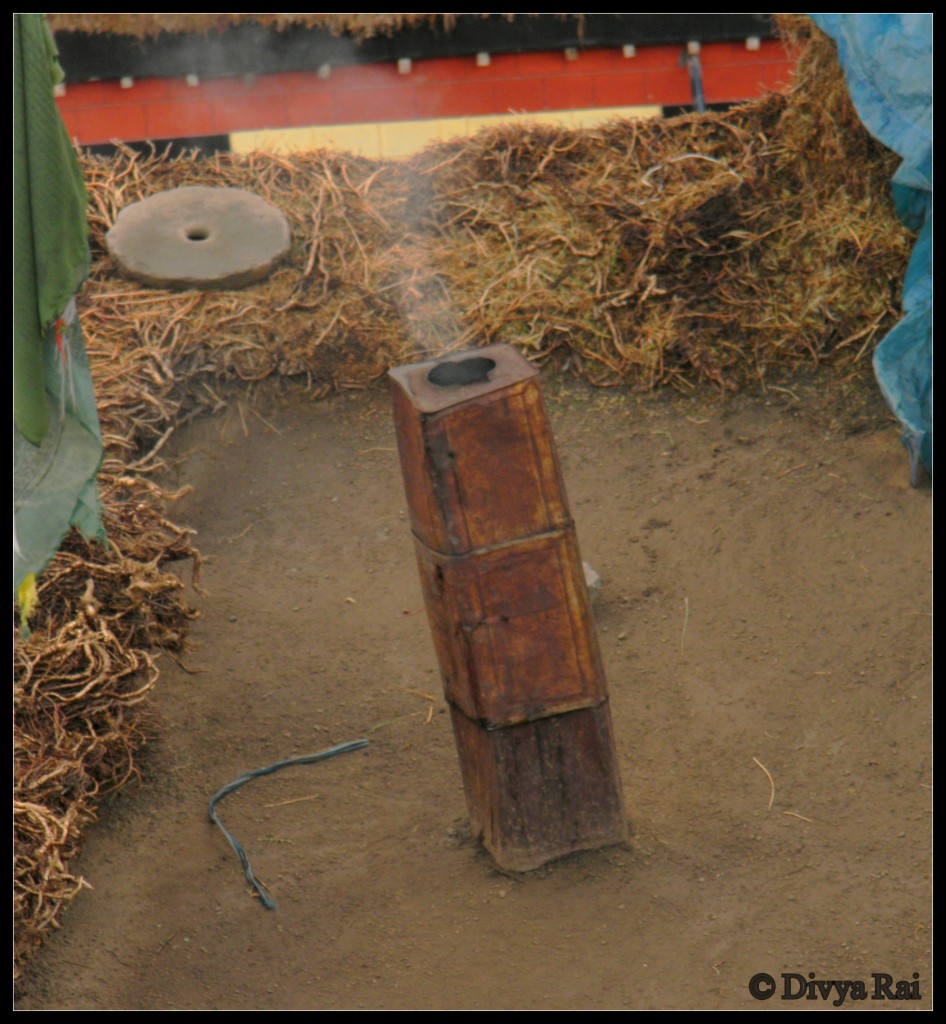 Came across this Chimney during the photo-walk. It is made of multiple tin canisters placed one above the other.

We took a quick 45 minute tour and I think by rural schedule it was time for the cattle to be herded home and hence there were animals all around us at every corner of the village.  The village had these strange alleys that meandered up and down the place. The snow clad Himalayas and the clouds too made for amazing back-drop. The entire place had a very rustic appeal to it. It had the essence of “making do with what is available” and doing a fabulous job of it kind of feel to it. I realized that the lateral thinking can conjure extremely amazing results.

During the photo-walk I had heard some of my travel-mates discuss about the “dry-compost” Spitian toilet. The first thing I did upon returning was to check that out. It is one work of ingenious common-sense. Spiti valley, for almost half the year is submerged in snow and water shortage during such times becomes quite acute. This toilet counters the problem posed by erratic weather that the valley faces. It also counters the water scarcity and uses naturally available other abundant resources.

Post my toilet-tour, roommate and I decide to lie down to rest our backs for a while as the previous day’s weariness hadn’t completely left us. It was 7:30pm already and our hostess informed us that she would be serving us the dinner by 9:00pm. It gave us a margin of one and a half hours before the dinner time. We decided to take rest for some time and then go and help our host- family with kitchen/house-hold work.
We got up at 8:30 pm and went and hung around in the kitchen. At about the same time, our guide, Anjaan dropped in to ask about our well-being and brief us of the assembly point and time for the following day’s safari from Demul to Komik.

Villages like Komik and Demul have “kutchcha” houses made of mud/thatched roof etc. These houses are warm in winters and cool in summers. In winters, the temperature can dip as low as -35 degree Celsius. In the colder months,the entire family houses in the kitchen (which normally is one huge room). The kitchen also has a corner which is used for all washing purposes and this space doubles up as the bathing area when it is needed. And that is the reason bathing was ruled out during our stay in both Demul and Komik. Kitchen is warmest of the places because there is a continuous fire for cooking etc.

The man of the family we stayed with, worked as a construction site laborer in the village. The family had 8 members to it.They had field-produce as one of their sources of income.The fields are submerged in snow for around half of the year and it is not possible to grow anything. For commercial use, the village folks grow peas, which is harvested in August-September.

At around 8:30, it was completely dark outside. Inside, we were making do with solar lamps and torches. We helped our host cook something called Kew. It is a soupy dish with herbs/spices from the hills, some vegetables and small dough balls. Everything is then put together and pressure cooked and you get this fabulous dish. Either we were dead tired every day or this place had awesome food. Whatever it was, anything related to the local cuisine tasted simply divine. The entire family gathered around the kitchen fire to have dinner.

The families here drink home-brewed liquors called ‘chhang’ and ‘arrak’. Both were made by fermenting barley in water but ‘chhang’ happened to be the milder of the two. ‘Arrak’  is left to ferment for longer duration of time as compared to ‘chhang’ and that is what makes ‘Arrak’  relatively stronger a drink. Probably that is what makes ‘chhang‘ a ladies drink, while the ‘arrak’ is reserved for the men-folk. I tasted both and concluded that ‘chhang’ tasted like beer, while ‘arrak’ tasted like vodka, albeit with a rustic flavor. Personally, ‘arrak’ is more ‘my kind of thing’ as I dislike beer.

As we progressed with the dinner, the family asked us about our lives and we about theirs. On the days the power is supplied regularly, the entire family gathers to watch TV, which is placed in the kitchen. They took us by surprise when they said they loved an Indian sitcom/serial called “Baani”. My jaws dropped at the information, but I soon recalled spotting the satellite antennae everywhere around the village (during our photo-walk in the evening).

Post dinner, we retired to our room at 9:30pm. The window had an amazing view of the hill range lit up with a full moon. I was tempted to photograph the entire view, but gave up the idea as the body longed for the bed. Me and dear roommate must have chatted for a while, but for sure had slept by 09:45pm. The magical thing about this trip was that we would straight hit non-REM (delta) stage of sleep within seconds of our head touching the pillow. For some reason, roommate did not sleep well in Demul and I was on the other end of the spectrum. I think we alternated turns to not sleep well. One of us would sleep like a log and the other one like an insomniac.